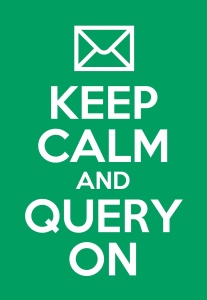 I already wrote a step-by-step querying guide HERE. But I left out the biggest piece of the puzzle: Writing the query letter.

So here you go, my attempt at a query letter guide.

First and most important piece of advice I can give is to read successful queries!

Also, reading sites that give query advice is very helpful. A great one is Janet Reid’s Query Shark.

Okay, so let’s get to the meat of a query. I’ll again start out with a link to someone else, because I do not think I’m an expert at this. I loved Susan Dennard’s explanation on “The Parts of a Good Query.”

Here is what I kept in mind while I was starting my query writing:

(think back jacket summary but less tropey. AKA don’t say “in a world where…”).

If it’s longer then consider why (did you include too many characters or subplots?).

If it’s shorter then consider why (did you not explain the world enough? The conflict? The character?)

The world can be a quickie explanation (especially if it’s a world we know already. e.g. contemporary). But if it’s a made-up or fantasy world, ensure the only facts you include are the ones relevant to the MC’s character and conflict.

I’ll use Hunger Games as an example since most people have probably read/watched it:

In the ruins of a place once known as North America lies the nation of Panem, the shining Capitol surrounded by twelve outlying districts. The Capitol is harsh and keeps the districts in line by forcing them all to send one boy and one girl between the ages of twelve and eighteen to participate in the annual Hunger Games, a fight to the death on live TV. (WC = 67)

This shows what has happened to the world and why each district must give up two children to the games each year. Nothing more and nothing less.

The Characters named in a query should probably be restricted to 2 (3 if there’s an MC, a main love and an antagonist). I’d only put names if the person is a POV character or they are actively influencing the story in a way that you need to reference them by name in order to explain the main conflict.

Sixteen-year-old Katniss Everdeen regards it as a death sentence when she steps forward to take her sister’s place in the Games. But Katniss has been close to dead before– and survival, for her, is second nature. (WC = 36)

This explains how Katniss feels about the games and a bit of her personal history to reveal her character.

The key word with the conflict is main. Don’t include sub-plots or sub-conflicts.

Without really meaning to, she becomes a contender. But if she is to win, she will have to start making choices that weigh survival against humanity and life against love. (WC = 30)

In the Hunger Games the main conflict is that Katniss volunteers for a game that makes her fight to the death and only one can survive. The subplot is that she is trying to protect her little sister and that she can’t figure out if Peeta is on her side or against her.

NOTE: This is actually the back-jacket summary of HG which is why it is shorter than an average query. Hopefully you get the idea of what I mean by the main points to hit to summarize the story.

3. Ensure that it is specific to your story and world.

This is where I’ll repeat not to use tropes or vague wording. If you say something like “MC must decide between love and family before time runs out” then I can find that in the summary of dozens of books. Be specific about why it’s a decision and how it’s bad if they choose one over the other and vice versa.
Note that in the above back-jacket summary everything is SPECIFIC to the story of Hunger Games. They say exactly what the world is and what Katniss’s conflict is.

Individual parts of a query:

So, I don’t think every query can use the exact same formula. But if you’d like a general outline to follow here’s one that can potentially work for about 85% of queries.

I like to personalize my queries because it explains why I chose that agent to query. I like to include it at the top but some people like to put it at the bottom along with their personal bio and other information. I also chose to include my word count, Age category (PB/MG/YA/NA/A), and genre (fantasy, sci-fi, contemporary, etc)

Not every query needs a hook, but if you want to include one it should be one sentence long and be specific about your story.

Introduce world and character. Show specific motivations for the character when the story opens and how they fit (or don’t fit) into the greater world you’ve created. Introduce the inciting incident.

BONUS: If you have more than one POV then you can introduce each character that has one. I had a dual POV book, so I gave each of them their own intro (complete with their personal conflicts and motivations)

Explain how the MC(s) react to the inciting incident and how it starts to change them/their world. Explain how the MC(s) plan to overcome or adjust to the conflict. Be specific to your world and your character. Do not use vague language like “or her world will be torn apart” or “A greater threat looms.”

If you want to include comps, you can put them here. Put a quick bio and any writing credits. If you didn’t already include it in the first paragraph, be sure to put Age category (PB/MG/YA/NA/A), word count, and genre (fantasy, sci-fi, contemporary, etc). And any final salutations.

1. Try to write the query summarizing ONLY the first 50 pages of the book. This is a suggestion given to me by many and it helps to focus the query (in the first 50, you should have already introduced world, character, main conflict/inciting incident).

2. Have someone who’s NEVER READ your MS read the query letter, then ask them what they think your story is about. If they can’t give you the main gist then consider re-writing.

3. Ask someone who HAS READ your MS how they’d summarize your book. (Obviously, they can’t write your whole query for you, but they can tell you what they think the main point of your story was from an outside perspective. We are often too close to our stories to see them clearly)

4. Take some time, write the 1-2 page summary instead. Maybe this’ll help you see what is important in your story.

5. Read your whole MS as a READER and see how the story flows.

No Responses to “Querying (2): Writing a Query Letter”